A comprehensive timeline of events following the downing of Malaysia Airlines Flight 17 in 2014. Hundreds of various sources are presented chronologically, without commentary and in context, allowing the viewer to adequately interpret the information themselves. 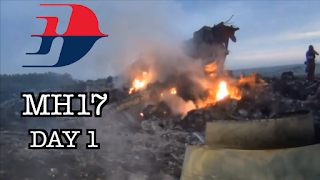 On July 17 Malaysia Airlines Flight 17 was downed over eastern Ukraine, killing all 298 people on board. As confused first reports came in, Ukraine blamed Russia for the tragedy before the news even broke on CNN. A message falsely attributed to a rebel commander went viral. The head of Ukraine’s intelligence agency presented alleged phone taps of rebels discussing the plane.

John McCain falsely claimed Ukraine was incapable of shooting down the plane. News stations spoke of lower-flying military aircraft the rebels had shot down previously and discussed whether they had capability to reach aircraft at 10,000 feet. With the information war adding to the ground war already raging in Ukraine, the difficult task of retrieving the bodies and wreckage from a war zone began. 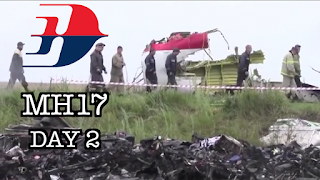 On July 18 OSCE monitors arrived to the crash site where emergency workers were searching for bodies. A UN Security Council session was held to discuss the tragedy. Ukraine produced more alleged phone taps and a video showing a Buk launcher moving “through Krasnodon”.

Fighting continued on several fronts with Grad rockets hitting Severodonetsk and Lisichansk, killing civilians and setting an oil refinery on fire. Many more civilians were killed in a brutal scene in the city of Lugansk. 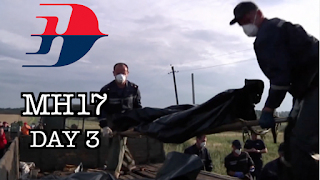 On July 19 bodies were collected by the side of the road, loaded onto trucks and transferred to refrigerated railway cars waiting nearby in Torez. During a briefing on the downing of MH17, Ukrainian Counterintelligence Chief Vitaly Nayda claimed 3 Buk launchers were smuggled back to Russia the day before.

Ukrainian government forces launched Grad rockets at residential areas and a school in Donetsk, as civilians retreated into bomb shelters. More rockets hit Lugansk and the OSCE observed some of the damage. Airstrikes were carried out near Krasny Luch. 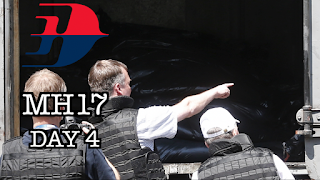 The OSCE visited the railway station at Torez where victims of the MH17 crash were being collected for transport. John Kerry appeared on 5 Sunday shows to accuse the DPR of shooting down MH17. DPR Prime Minister Alexander Borodai announced the black boxes had been found and were ready to be handed over. 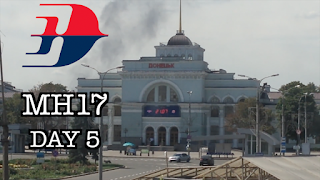 On July 21 Grad rockets killed 4 civilians in the north of Donetsk during a Ukrainian military operation near the airport. Ukrainian forces also launched airstrikes in Dzerzhinsk before capturing the city along with Rubezhnoye and several other locations.

Malaysian Prime Minister Razak reached an agreement with DPR Prime Minister Borodai to retrieve the bodies and black boxes from the crash site. While Dutch experts on the ground were impressed with the body recovery effort, it was condemned by President Obama and speakers at the United Nations. 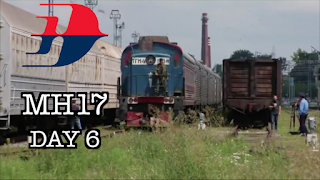 On July 22 the black boxes from MH17 were handed over to Malaysian representatives who then traveled with most of the bodies to Ukrainian-controlled Kharkiv. Malaysians later inspected the crash site along with the OSCE who reported being provided "unlimited access". European foreign ministers met in Brussels to impose measures against Russia.

Ukrainian forces regained control of Severodonetsk and Popasna. Jets bombed nearby Pervomaisk and civilians were killed after more shelling in Lugansk. Shaposhnykovo was stuck with GRADs in an attack that began the night before. Fighting was heard in Donetsk and near the crash site, and DPR forces gained control of positions near the Russian border. 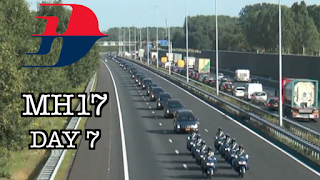 On July 23 Ukrainian forces continued attacking Lisichansk and gained control of 3 towns near Donetsk. 2 of their warplanes were downed near Marinovka as their troops faced DPR encirclement near the border. Protests against conscription took place in Western Ukraine.
40 MH17 victims were flown back to the Netherlands, loaded into hearses and driven past mourners on the way to Hilversum for identification. Anonymous U.S. intelligence officials presented their case to select journalists and significant reports were published by Reuters, Paris Match and the BBC. 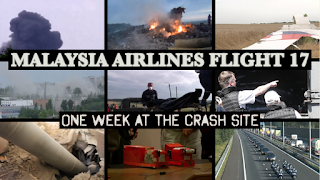 One Week at the Crash Site (Summary)
TO BE CONTINUED...