Yuriy and Katya Tuv were buried on May 28. Anna left the hospital with the assistance of a wheelchair to attend the funeral, and a large number of people from the town joined her. Graham Phillips filmed some of the procession, and a few people conveyed their anger and sorrow on camera.

"Tell Poroshenko that he is scum and crud," one said. "Damn you, your children, your grandchildren, and let a rocket fly to the red lilies in your house, you bastard! The President of peace, you're not the President of peace! You're a fascist and a murderer! Damn, there are kids! What terrorists and separatists?! These are children, people of peace! Bastard, bitch, damn you!"[21]

"Graham, tell all the world, they are killing us," said another. "How many more will they destroy? Let the world know."[22]

Six days after the funeral Anna spoke with Russell "Texas" Bentley from a hospital in Donetsk. Bentley is an American volunteer for the Donetsk People's Republic, currently doing video reports for Essence of Time. Five days earlier he reported from the ruins of Anna's house.[23] With her mother and two young children in the room, she said:


If I'm shown to Petro Alekseevich Poroshenko, I want, I'm not black-hearted at all. I'm too religious, but, from the bottom of my heart, I wish you a long life, I want you to suffer the same pain I'm suffering now every moment for the rest of your life. The wounds will heal up, but this is you who planted a dagger in my heart, who bereft me of my child. You bereft me of my beloved I was living and breathing. I wish you were in the same awful fear my little daughter had been in before she was torn asunder. If you're not totally devoid of humanity yet, I beg you, stop.

I beg all the world: Stop Ukrainian regime. Stop hammering mothers and their children. Guys. Armed Forces of Ukraine.  Everyone, who's trying to mobilise to Ukrainian Army, this is not your war! Nobody will reward you. When you have your arms and legs shot away, you won't get social payments. Nobody will say "thank you". You're forwarded to fight not with militarists. You're encouraged to kill children and women and civilians. You're just stooges, tools of your bosses. I beg you, stop. I beg everyone. I'm addressing the whole world just now. On behalf of my little girl, who's no more, who used to love the entire world and meant no harm to anyone... 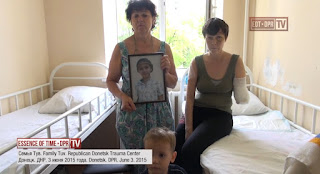 My husband was everything to me. Everything hung on him. Just everything. We've given birth to our daughter recently, we had a joyful family. My life has collapsed. I just can't understand what for. What is our fault?

The dad was so happy to have a daughter. My little Katya was torn into two parts. I had no chance even to see them in the coffin for the last time, because they were disfigured and mutilated. And how many mothers like me are crying at the moment?...

Look at this girl. Why? My honey. I had not one hand shot away, I had three of them shot away. She used to do everything. She was just the child from the heavens. Why her? I was being driven in an ambulance, and she was just torn asunder. Bottom and legs. An ear was torn out. She was mutilated all through. My husband, a handsome man, was torn asunder. My Katya is no more, no more. This is all I have now. Only these two pictures of her. Petro Poroshenko has bereft me of her.[24]