Kai Vittrup from the Organization for Security and Cooperation in Europe (OSCE) Special Monitoring Mission (SMM) visited Slavyansk and spoke to the press about his task:


We have to first of all find out what is the status here, how is it functioning, how are people living. We come from as you can see OSCE, and one of our tasks is ... to go in here and find out how are people living - what about electricity, food, water, hospitals, security, police, all those good things - to provide 57 member states with those information so the member states know what to do.[36] 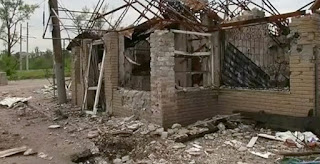 In Kiev the "Anti-War" group organised a small protest outside a visiting European Union delegation. Dnepropetrovsk City Councillor Victoria Shilova explained why she was there:

We are here to attract attention and denounce the killing of civilians and particularly kids. There are only mothers in our association - we don't have weapons or money, just our Ukrainian passport and citizenship. So no matter where our Ukrainian children are living - in Lviv, in Dragobyishi, or in Donetsk and Lugansk - we are asking our Ukrainian army to stop killing our Ukrainian children. You are willing to deal with military people? Go ahead, man against man. But not against children... The youngest kid - Igor - was a 10 month old baby. He had died because of the fragment wound in the heart. He had just started to walk. In Lugansk Region. Is it normal?[37]

"How will you qualify the government's idea that the ceasefire was a part of the plan?" she was asked.

"I don't even want to qualify what they are doing. It's clear to everyone. To fight against their own people - it's a crime. If they say that Donbass is Ukraine, why do they kill their Ukrainian people in Donbass?"

Later she addressed the European visitors inside in the building: 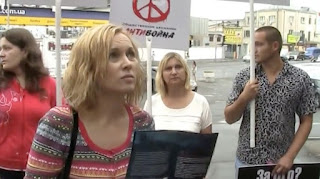 Here's a manual, a booklet, where it tells exactly what is happening, how many died. There are photos, they are corresponding. I will now show you on the camera what those pictures are. Please, have a look, this is in Europe. Is it possible in Europe or not? Are such horrors possible in Europe? Once it was in Serbia, in Yugoslavia, and now it is in Ukraine, in my dear country. In Donbass, on Ukrainian land such things are happening. Where they bomb Ukrainian towns and villages...

Maybe somebody will see this, those who look out of the window? They don't come down to us, they don't want to take an official message. We can't reach out, TV channels don't hear us, they don't let us on air, they don't show the truth. I encourage not only Europe, but also America and all the other countries. Look at what is happening in Ukraine. In our home country which entered the Euro Association. Is this normal European life, to kill children? Is this normal European life, when women in Lugansk got their feet blown off after the so-called explosion of air conditioner?[39] 12 people were killed and 8 women died in Lugansk. Odessa - is that a democracy? Is this freedom of speech? Look at that. What if it was your children, respected European comrades, what if it was your children...

You all should sit down at the negotiating table, absolutely all conflicting parties and see what comes of it. And it's not the war that must go on, it's the truce.[41]