Radical Party leader Oleh Lyashko travelled to Starobilsk in the evening, a city in the Lugansk Oblast still controlled by the Ukrainian government. He visited the local Chief of Police, Askar Laishev, to inquire about Viktor Rybalko, who allegedly organised the May 11 referendum for the Lugansk People's Republic (LPR). He was accompanied by his own camera crew,[25] one from VICE News,[26] and the Lugansk Oblast Chief of Police General Naumenko.

"Rybalko lives in Koshevogo street," Laishev told them. "Our people monitor that street and they report that he isn't there. He left when the army entered the region. He left his house. This is the information we have. He left his Ukraine."

(From left to right) Lyashko, Naumenko and Laishev

"Why are your hands shaking," Naumenko asked Laishev suspiciously.

"He is worried because the boss showed up," said Lyashko. "Where are the terrorists... Are there terrorists in Starobilsk?"

After a brief silence, Naumenko prompted: "You have been asked. Answer! Why are you just sitting there?"

"We have a democratic country and every person has a right for their own opinion," said Lyashko. "Let them express it. We're talking about the people who were tearing off the flags, who were taking up arms, who were blocking the state institutions, military units, etc."

"Nothing was blocked in Starobilsk," said Laishev. "We had a protest when the flag was lowered. But nothing else of what you've just mentioned."

"Did you hold an illegal referendum?"

"Yes, the referendum was held."

"Here you go," said Lyashko conclusively. "And you are telling me that nothing happened here... It's because of the inaction of chair warmers like you, we have this mess in Ukraine... Because you're ready to serve anybody, so you can keep your position and get your share. That's the reason why your hands are shaking and why your forehead is sweating."

"The police are with the people of Starobilsk," Laishev said at an earlier rally attended by Rybalko[26]

Lyashko left with several armed men to visit Rybalko's address. After a brief drive, they walked the final streets and knocked on the door.

After his wife answered, Rybalko appeared in the doorway. "You organised the referendum and the protests, didn't you?" Lyashko asked him.

"You didn't organise anything?"

"Put some clothes on. Guys, please accompany him."

While waiting for Rybalko, Lyashko spoke to the people who were recording his endeavour. "Did you hear? They told us they had no idea, that he wasn't there. Did you see this?" Turning to the doorway, he added: "I'll give him one more second."

He turned back to Simon Ostrovsky for VICE News. "In other words, the police is covering for the separatists. Not only are they not helpful, but they cause harm." Ostrovsky could only nod in agreement, presumably supportive of or intimated by Lyashko. When Rybalko came down the stairs he was placed in handcuffs.

"When you were calling for Russia didn't you think about how it would end for you?" asked Lyashko.

"And when you organised the referendum?"

"I didn't organise the referendum."

"You didn't? In other words, you did nothing. And you didn't speak at those protests?"

Rybalko was escorted into a van by a man in a balaclava, and was driven back to the police station. 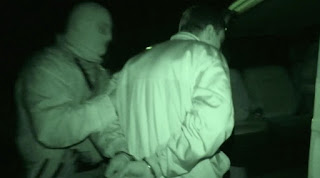 He was brought in front of Laishev, who was asked by Lyashko: "Is this him?"

"Shall I shoot you right now or later?" asked Lyashko as he drew his gun from it's holster.

VICE News ended it's video with Ostrovsky saying: "So what happened after they brought in the suspected separatist, was that the Chief of Police for the Lugansk region asked the Chief of Police of this town to write a letter of resignation, for not having caught the separatist before. Looks like he's out of a job."